The Epic Tragedie of Nate the Snake

Lisa Posted on April 1, 2019 Posted in poetry No Comments

I skipped Sonnet Sunday yesterday so I could tell you this tragic tale of woe instead. Dating back to circa late spring 2004, it was first recounted to me by my friend Jesse Bickel, a classmate and co-laborer at InterVarsity Christian Fellowship (and in berm-building on a Habitat for Humanity trip), wherein he blessed many people with its telling. In honor of its approximate 15th anniversary, I commissioned the inimitable Jonny Jimison to provide illustrations.

Because this is a longer work (it is, after all, an epic poem), you may download your very own PDF copy to print, enjoy, and share with the generations to come. 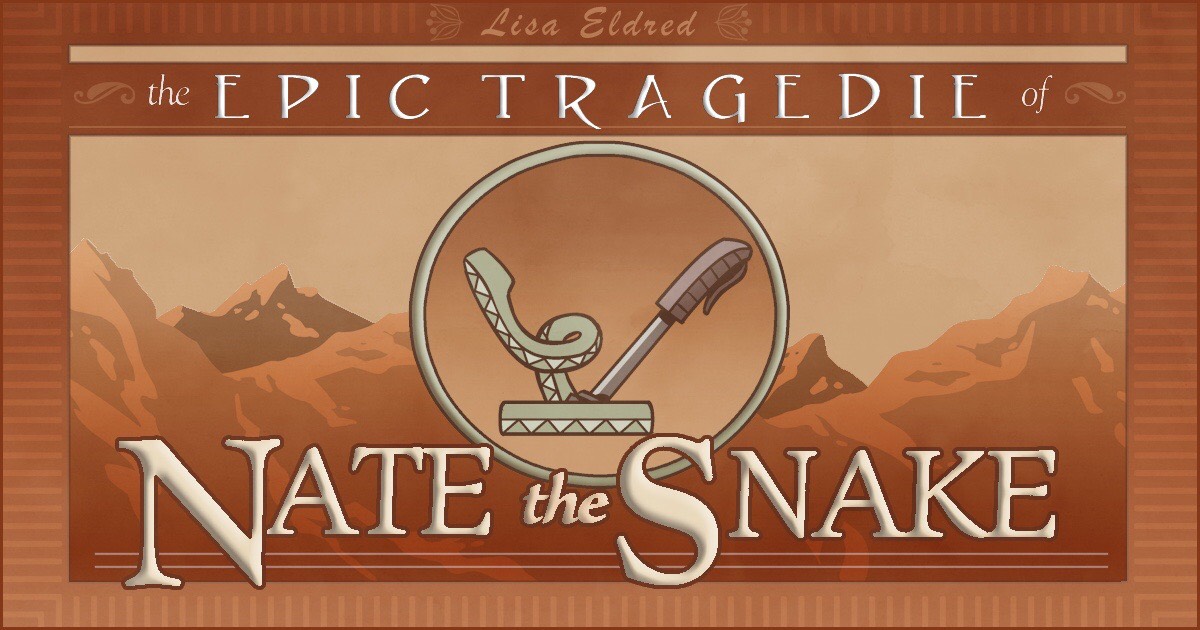 Oft have the prior poets copied down,
With aid of Muses, legends of the past.
Consider Homer, Virgil, Ovid too.
They all transcribed their cunning heroes’ wiles.
Anointed by the Muses’ sweet perfume,
With golden nectar, given honeyed tongues,
They spake and blessed the world with handsome tales.

So I as well invoke the Muse this day:
Rain down on me thy Bath and Body Works,
And let my cup be filled with Mountain Dew®,
And other caffeinated beverages.
O, grant me visions in my monitor
Of thy fair visage, and of Nate the Snake!

Now, having paid lip-service to my muse,
I’ll start my tale now. It begins as such.
The name is unimportant, though the man
Is central to this tale of life and death;
Nor is the time (though some may disagree).
We’ll call our hero Jesse, after he
Who first made known to me this tragic tale.
How cunningly he tells it! How amazed
His audience! They listen to his speech
Attentively, and hearken his wise words
Which fall, like o’er-ripe fruit from untamed vines
And bees attack, and cows tramp ‘neath their hooves
And mash to bits, and fertilize the soil—
Like this he tells the tale. But I digress.

Our hero’s name is Jesse. He is born,
We’ll say, in nineteen-hundred-two, though that,
Again, is changeable. So, moving on,
He’s born in New York City, as an heir
To wealthy bankers. Well—they’re bankers now—
Again, it only matters that they’re rich.
They own the finest clothing, go on tours
Of Venice, buy a car, and send their son,
Our Jesse, this sad tale’s protagonist,
To London for his schooling, where he learns
Arithmetic and Latin with the Prince
Of England. There in school he also learns
Of the existence of a certain thing,
A special lever, which, when pulled, results
In the destruction of the Universe.

(Well, not the universe. Only the world.
I had to change it to fit metrically.
Am I not clever? I believe I am.)

So anyway, when Jesse’s parents die
(Quite tragically—they’re torn from limb to limb
By Elephants while on a hunting trip
In deepest, darkest Africa’s bright plains)
Their business: his inheritance. He weds
A motion picture star in ‘twenty-three
And lives a blesséd life for several years.

O Fate! Why must thou tangle Jesse’s string?
Why can you not allow him to live free,
Unfettered by the cruël twists of life?
Alas, poor Jesse! Mourn, ye mourners! Play
A dirge, o people; weep aloud for him!
For Jesse’s fate will not be happy long.

The first misfortune which arrives is this:
He breaks a wrist while jockeying a race.
Kentucky’s finest horse could not protect
Our hero from his tragic fall—alack!
(As a result, he lost the race as well.)
His bones never do heal quite properly;
He will not sign his name quite right again.
Not even Job’s sad tragedy compares
To Jesse’s unhealed bones, nor what comes next:
His wife divorces him. Alack the day!
O Misery! Why dost thou haunt him so? 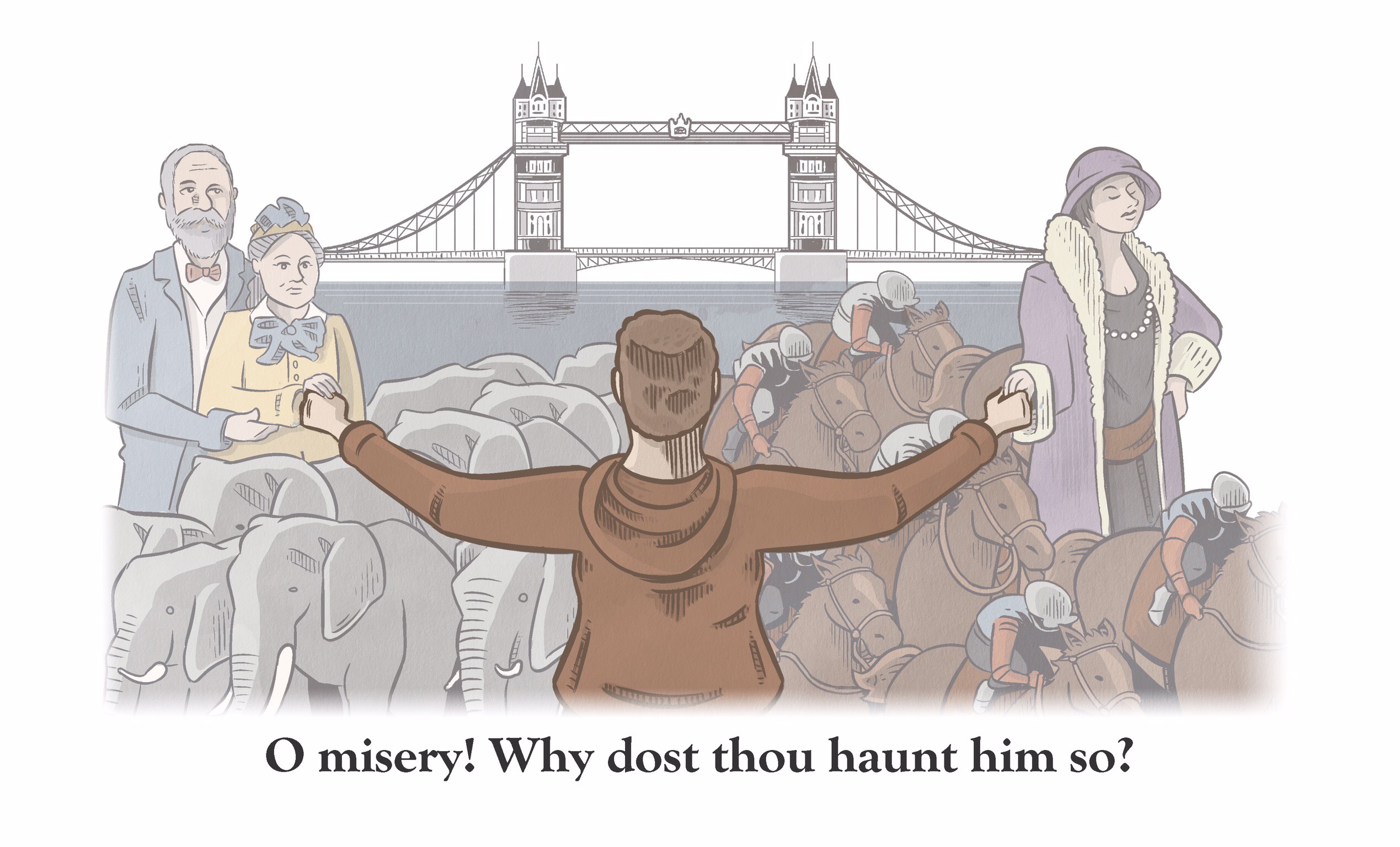 Poor Jesse, his heart filled with tortured thoughts,
Decides to find the lever, and to pull,
And thus to show the world his saddened heart.
He sells his company, takes all his cash
(And this two days before the Market’s crash)
And searches for the lever far abroad.

In Araby he haunts the pyramids;
In Greece, pores over all the ancient tomes.
He moves each stone in Stonehenge, climbs the peak
Of Everest. He asks Tibetian monks
And crawls the sewage system beneath France.
This takes ten years. His money’s almost spent.
He goes back to America to search.
He searches every state, turns every stone,
‘Till finally, when on his final legs,
He’s out of money; almost out of food
And crawling through the Arizona sand,
Poor Jesse spots a cave and there he sees
A shining bit of metal gleaming there:
He sees it! There’s the lever he must pull!

Rejoice, ye angels! Play, broad Heaven’s band!
For misery is soon to end this day.
O all ye poor in heart, be glad in this,
For soon this day you’ll see the face of God.

Once Jesse pulls the lever, all will end.
He crawls, he inches forward, reaches out—
When suddenly, a voice is in his ear:
“O, do not pull the lever!” What is this?
And Jesse looks around to see who speaks,
And seeing no-one, reaches out again:

“I say, don’t pull that lever!” There again!
From whence arrives this voice? Who speaks thusly? 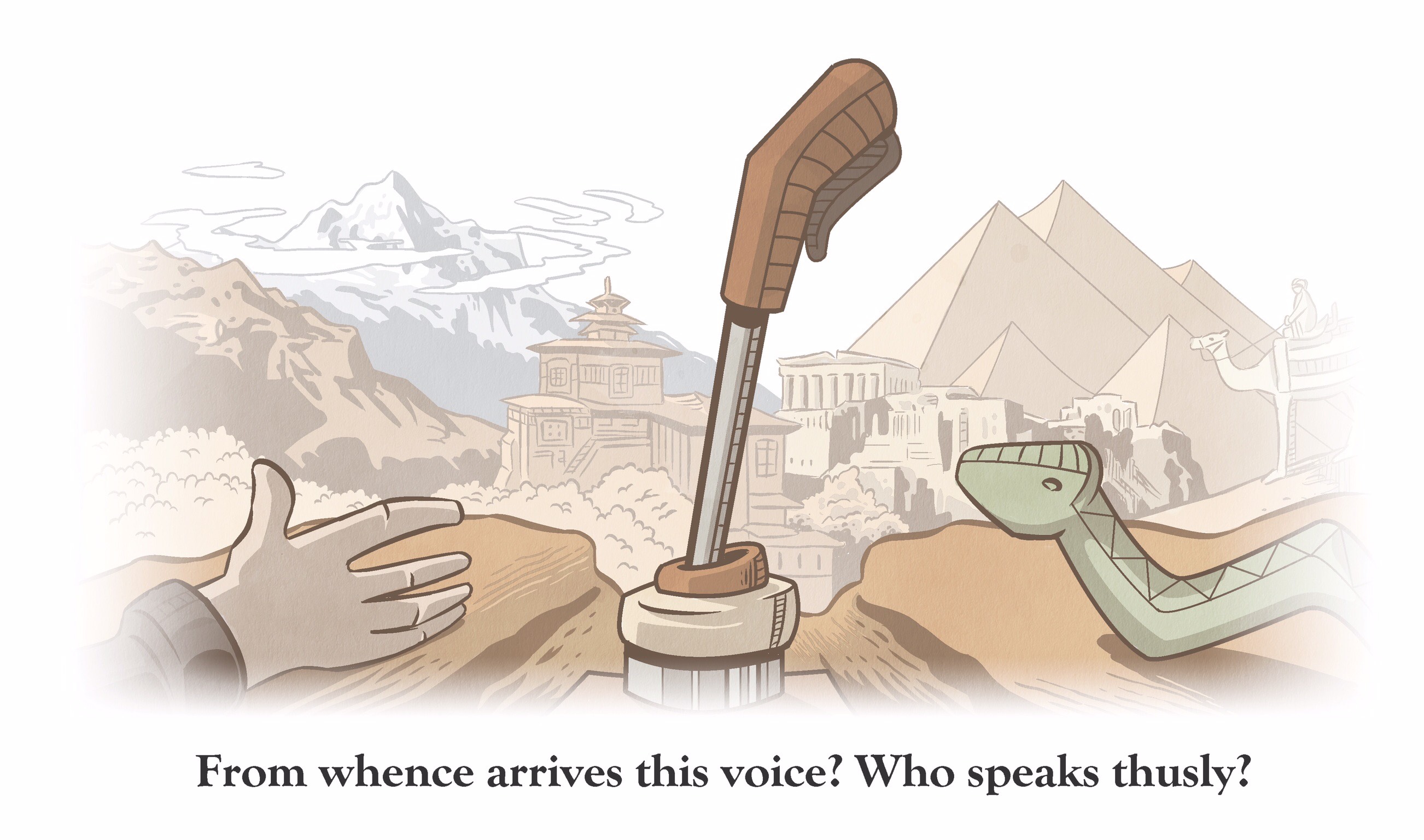 And Jesse looks around until he sees
A snake, warming itself upon a rock.
In marvel, he inquires: “Say, did you speak?”
The snake replies, “Why yes, in fact I did.
My name is Nate the Snake.” And Jesse shouts:
“A talking snake! This changes everything!
Together, you and I could become rich.”

And Nate the Snake, his eyes gleaming like coal
Found in the heart of mountains, with all his heart
Agrees to Jesse’s plan. They find a road
And hitch a ride from the next passing car.
Their payment: Jesse asks, and Nate replies.
The driver, so amazed, invites her friends
And family to see their private show.
They earn their room and board with this at first,
And soon some extra cash, and finally
They start a circus. Nate headlines, of course.
Their fame spreads past the Arizona sands
Across the nation, then across the world.
They travel to Korea with Bob Hope
(And Nate gets lucky with Madame Monroe).
They’re filthy rich. The money overflows
‘Til finally they decide to retire
And move back to the place where they first met.

They build a highway across the desert sands
Right past the lever, and there, on either side,
They build their mansions and live happily
Until the friendly competition starts.

It starts when Nate the Snake builds a large berm,
And Jesse, thus inspired, hires all the best
Landscapers in America to build
A bigger berm than that of Nate the Snake
And even puts a swimming pool in back.

Next, not to be outdone, good Nate decides
To build a water park in his back yard.
(He is, of course, a water-snake. One might
At this point in the tale inquire why
A water snake was in an arid land.
The answer: Real Jesse, he who told
The story first to me informed me that
The cave in which the lever and the snake
Resided prior to the fictional
Man Jesse came upon the scene, was deep
And it contained a water pool below
Where Nate resided most of his long life.)

So Nate now has his water park. At this,
In his back yard, our hero builds
A large amusement park. Now this goes on
For quite some time, with airports, concert halls—
Whatever you can think of, it is built.

O Pride! Why cause ye such a fall as this?
They’re happy. Let them live as they desire
They’ve suffered misery enough by now.
Why have ye such a need to carry on
Their suffering? But now, alas, it ends
As all good things must come to their demise.

It ends as follows. Jesse’s ninety-three
And it’s his birthday. Therefore he invites
The New York Philharmonic Orchestra,
The President, every celebrity
Which he can think of to come celebrate
With him and Nate the Snake and also
To celebrate the moving of
The Sydney Opera House from Australia
To Jesse’s great back yard. So Nate heads out.

He can’t move very fast—he’s getting old.
He knows that it will take him quite some time
To cross the road which separates the two—
But that’s okay, of course, because that stretch
Of road is private for the two alone.

And so he crosses, slowly, inch by inch.

Meanwhile, a semi turns and heads down that long road.
It carries pieces of China’s great wall
To build on Nate the Snake’s large property.
The driver’s going fast, too fast to stop
After he sees the snake crossing the road.
He panics, looks around quite frantically,
And sees the lever at the highway edge
And sees the snake and sees the lever there
And brakes, but—No! The tragic tale ends here—

For Nate is spattered—paints the highway red.
He had no chance to flee—he was too slow
To flee the speeding semi. Thus: his doom. 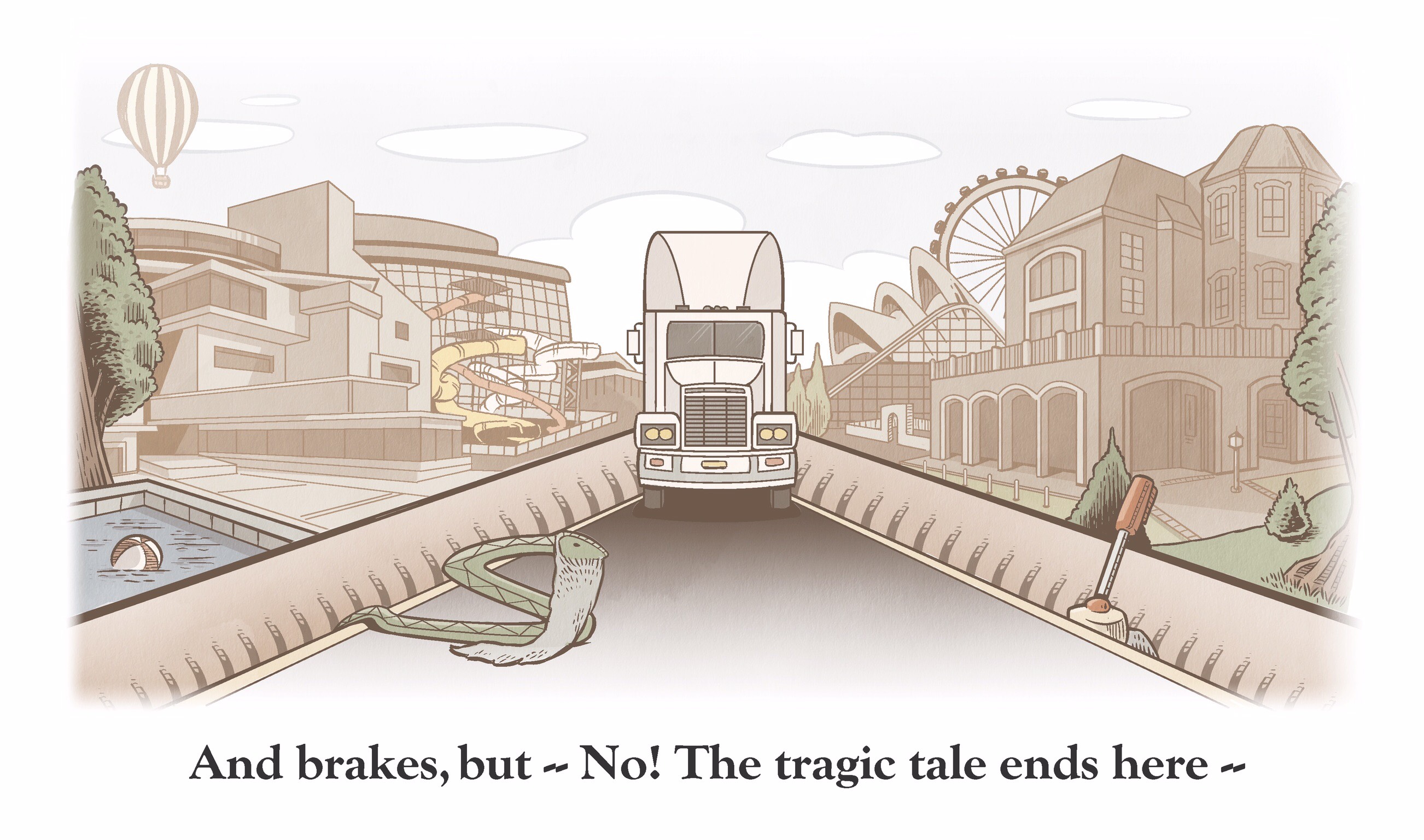 When Jesse realizes that his friend
Has not arrived at his celebration,
He rushes out to see what’s gone amiss
And see the trucker standing there, in tears
And asks in horror: “No! What have you done?”

The trucker cries: “I couldn’t stop myself
In time. I saw Nate crossing, couldn’t swerve,
Because I saw the lever at the side
Of this long highway, and I realized:

“It’s better Nate than Lever, in the end.”

0 Comments on “The Epic Tragedie of Nate the Snake”