↓ Skip to Main Content
Home › poetry › All I Know of Liechtenstein 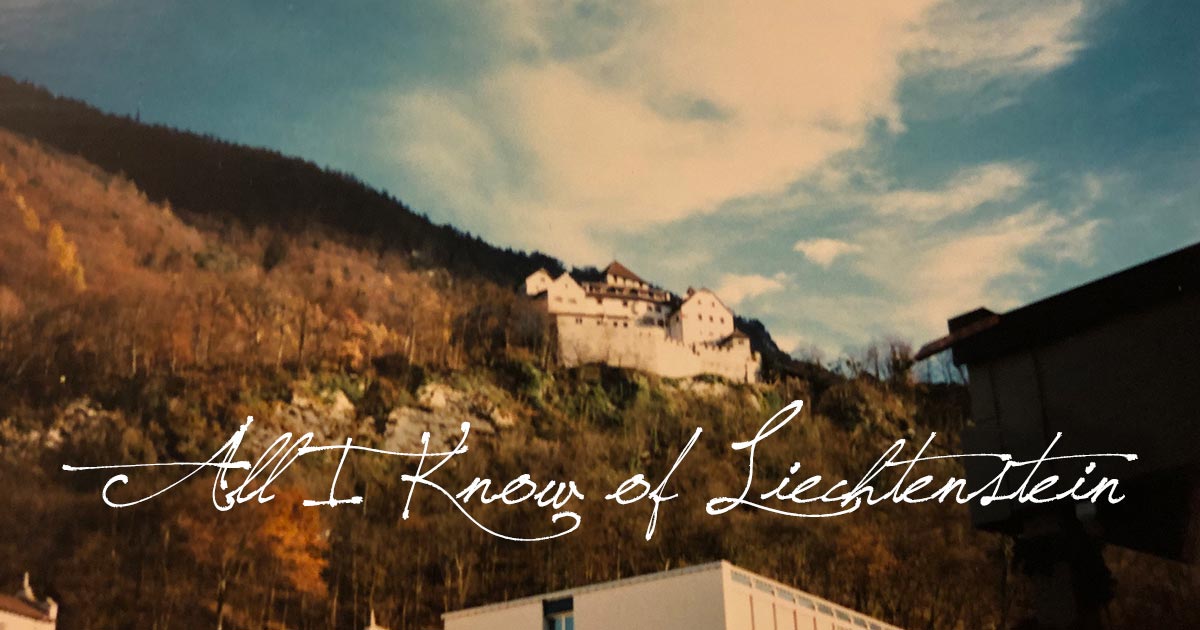 First, an apology: I was traveling last weekend and although I returned in time to prepare a poem, my poor dog was having serious tummy issues—way worse than the separation anxiety I assumed he was having (he’s doing much better now). So instead of publishing a poem here, I threw the following haiku on Facebook:

Busy traveling—
Then returned to a sick pup.
Time just for haikus.

Anyway, on to today’s poem. In eighth grade my family used our inheritance money from my grandpa to visit my uncle, who had a research grant in Switzerland at the time. It was a memorable trip for numerous reasons—first international trip excluding Canada, first airplane that I was old enough to remember, plus lots of family memories and in-jokes born there. I also remember lots of train rides through gorgeous scenery that I ignored in favor of Tetris on my uncle’s gameboy, but that’s a side issue.

One afternoon we hopped across the border into Liechtenstein, a small country between Switzerland and Austria. What I remember of the trip is recorded in today’s poem… but mostly I remember the pride of knowing that such a tiny place existed, and having been there.

Today’s poem was written during last year’s Poem a Day challenge. The prompt was to pick up a thread from another poet’s work. My friend Amelia Friedline had written a poem entitled “All I Know of Luxumbourg,” so I wrote mine in response to hers.

As a final note, the poem claims we tied the Liechtenstein trip to our visit to Appenzell, which is relatively close, but when I looked at my photos just now it turns out we visited Appenzell at the beginning of the trip and Liechtenstein was the last thing we did. Oops. Poetic license, I guess.

Although I’ve never been to Luxumbourg,
I’ve spent an afternoon in Liechtenstein.
From Appenzell we only had to board
A train, head south, and cross the river Rhine.
There were no petrol stations, Toblerone;
But there were cowbells, and a passport stamp.
We likely saw some castle made of stone
And found a footpath where we’d loudly tramp
Like the noisy Americans we were,
Some midwest tourists traipsing through the Alps
(So many cold trails I had to endure,
Likely refusing hats to warm my scalp).
No: At that age I was too immature
To then appreciate just where we were.