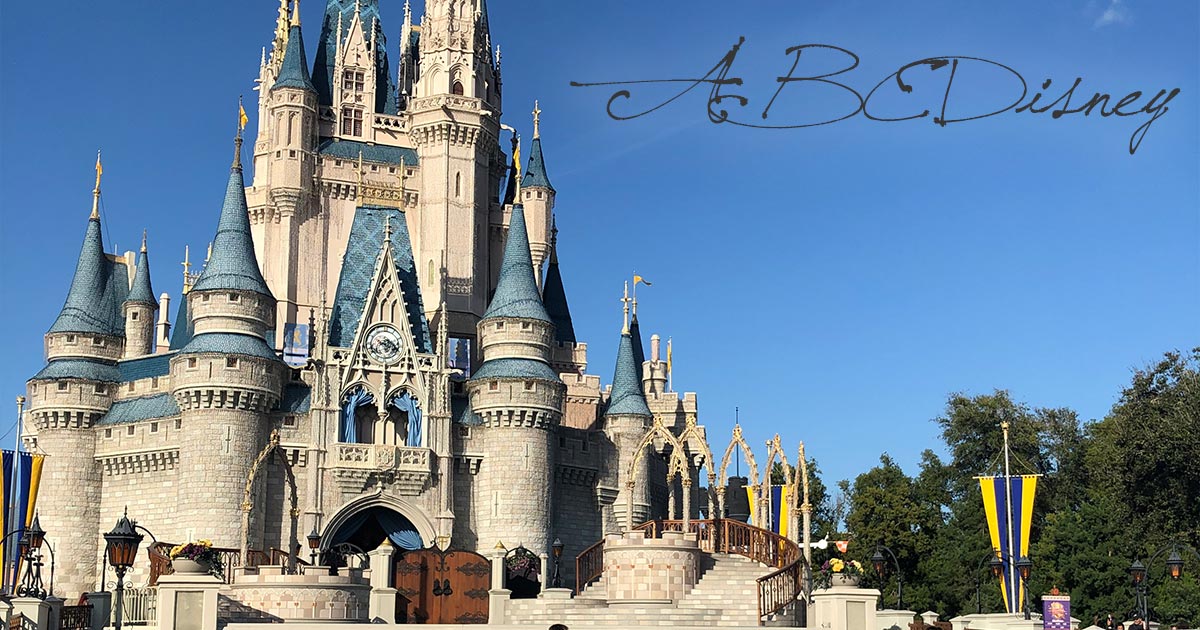 I recently finished a chronological watchthrough of the Disney animated features—a long and fun project, starting with Snow White and going all the way to Encanto. I skipped some by choice and added a few by DisneyToons (most notably A Goofy Movie), and generally watched the studio/company evolve.

Today’s “poem” is just an alphabet poem inspired by Disney. It probably doesn’t make much sense, but it also doesn’t particularly need to. After the poem I’ll post more thoughts on the project itself. Oh, and just like the project itself, I definitely “cheated”—by which I mean I used “except” for X. Deal with it.

Oh, and it’s worth mentioning that Yar is from the 2000 CGI movie Dinosaur, which I honestly completely forgot about. So boring.

This was a fun project. It was fascinating to revisit the earliest ones (or watch for the first time, for that matter). The very first—Snow White and Bambi in particular—seemed to be more about showcasing what they could do with animation. Neither had much of a plot. Bambi especially felt more like an art-house film than entertainment.

Disney figured out (but frequently forgot) the formula by the 50s: relatively solid plot and characters, beautiful animation design, memorable songs, memorable conflict (usually a villain). I think those elements are the true key to true Disney classics, though you can occasionally get by without songs if the rest of the movie is solid (Wreck-It Ralph). Start to lose the formula, and the film falls apart. It might be outright bad (Chicken Little, which also committed the sin of being a bad CGI experiment). It might have a terrible plot (Aristocats, whose villain was probably the most sympathetic—I mean, the lady willed her fortune to her cats and didn’t leave the butler as their overseer to inherit the money on the cats’ death). Or it might simply be forgettable (Dinosaurs, which I basically forgot about completely). Granted, probably every Disney movie has a group of hardcore fans somewhere that grew up on a particular film and adores it. I saw someone online who named their puppy after a character in Brother Bear, for example. I probably appreciate Robin Hood mostly for similar reasons, though Roger Miller’s songs definitely helped. Ultimately, though, the most quintessential Disney classics follow the formula.

I’m posting links to all of my livetweets below, plus a few quick notes about each.  You’ll notice a few are missing, the biggest of which is Sleeping Beauty, which I had watched shortly before starting this project. I thought I had live-tweeted it, but Twitter isn’t helping. It’s sad, because it and Cinderella are probably the most quintessential of all Disney movies. In fact, I’ve got it on as background noise right now and it’s live-snark gold. Ah well.

Pinocchio – A, uh, product of its time.

Ichabod and Mr. Toad – Some good creepy moments in there.

Cinderella – Quintessential for a reason, though the mouse stuff drags on a bit.

Alice in Wonderland – More to it than I remembered.

Peter Pan – How has this not been canceled?

Lady and the Tramp – Racist depictions of dogs, but it features a Scottie, so all is forgiven.

101 Dalmations – In which Disney basically decides to have fun and play loose with, like, motivations.

The Sword in the Stone – in which one of the most prominent female characters is a chipmunk.

Aristocats – The villain got the raw deal.

Robin Hood – A surprisingly healthy depiction of people being comfortable in who they are. Also, a fantastic depiction of the role of organized religion in the face of systematic oppression.

Many Adventures of Winnie the Pooh – Pure wholesomeness.

The Rescuers – A good excuse to set up the eventual, superior Rescuers Down Under.

Fox and the Hound – Definitely depressing.

The Black Cauldron – Should have been made by Studio Ghibli. Might have actually been good.

The Great Mouse Detective – Disney crawls out of an animation hole, but the plot fails to catch up.

Oliver & Company – Works better if you have childhood nostalgia for it.

Rescuers Down Under – Disney Does Indiana Jones.

Beauty and the Beast – Quite possibly the best Disney villain.

Aladdin – Another movie that probably couldn’t be made today. Possibly the best sidekicks.

The Nightmare Before Christmas – Worked better than I remembered.

The Lion King – Not Hamlet. Seriously.

A Goofy Movie – Would have loved it had it not featured Goofy.

Pocahontas – Works better as an adult movie than a kid movie.

The Hunchback of Notre Dame – Disney attempts their own Les Miserables; the protagonist is gaslit by literally everyone

Hercules – The most 90s of female love interests ever.

Mulan – It was fine?

Tarzan – Behold, music as third-person narration. Or: We paid for Phil Collins, gosh darnit, we want him to sing.

Emperor’s New Groove – Should have been a Saturday morning cartoon instead.

Atlantis: The Lost Empire – Interesting characters, but didn’t quite come together.

Lilo and Stitch – Works way better than it has any right to.

Treasure Planet – Disney tries to cash in on that “teen angst” they’d been hearing about.

Home on the Range – In which the villain hypnotizes cows by yodeling and then forecloses on farms because why not.

Chicken Little – Had its moments if you can get past the terrible character design.

Meet the Robinsons – Let’s just keep moving forward past this one, shall we?

Enchanted – Definitely a lot of fun references to catch.

Bolt – Probably my favorite new discovery from this project. The fact that I had a 10-month-old puppy at the time definitely has nothing to do with that.

Princess and the Frog – A solid classic.

Tangled – A mess with heart.

Winnie the Pooh – Lacked the same magic as the earlier movie.

The Pirate Fairy – Way more entertaining than a Tinkerbell movie had any right to be.

Ralph Breaks the Internet – It was fine? Better than the Emoji Movie, I’m sure.

Raya and the Last Dragon – Too bad that a movie that focused on the importance of cooperation was kind of ruined by the writing committee.