Lisa Posted on March 28, 2021 Posted in poetry No Comments 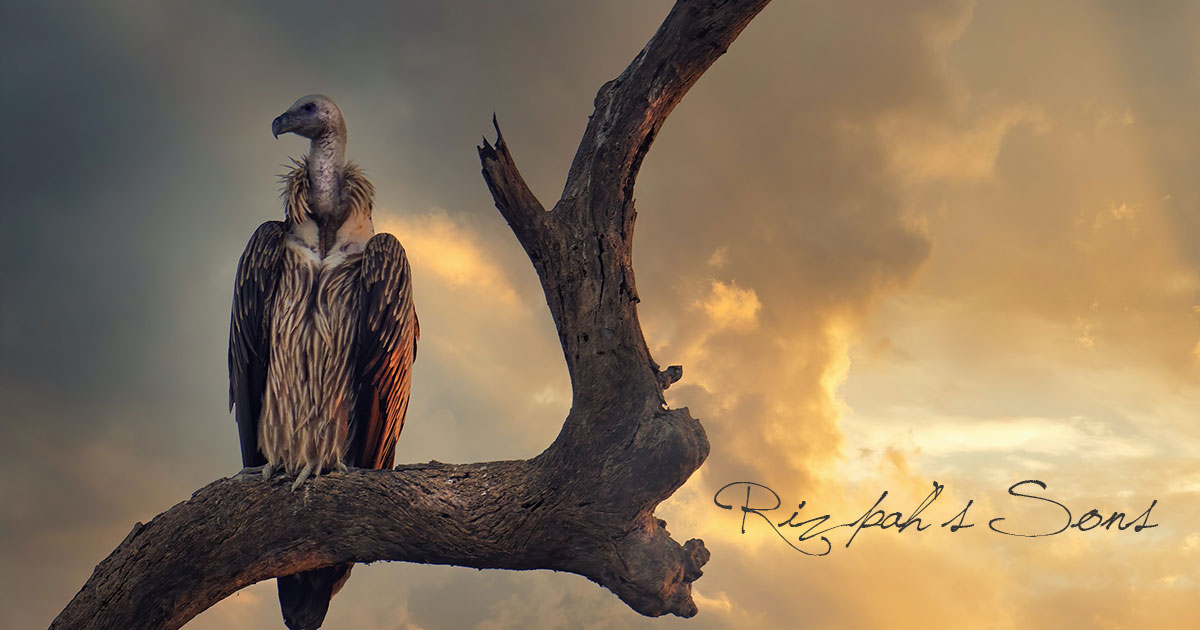 Happy Palm Sunday! Have a poem about death.

Out of the whole Bible, some of my favorite books are Judges through 2 Kings—they’re the historical books that are most concerned with stories and random details. One of them is the story of Rizpah. Basically, she was a concubine of King Saul’s. After Saul died, one of his generals may or may not have slept with her—a conversation that for complex reasons led to David claiming the throne. At some unknown point during David’s reign, there was a famine, and it was determined the famine was because Saul had attempted to wipe out a protected people group known as the Gibeonites in a misguided attempt to win God’s favor. David asked the remnants of the Gibeonites how he should handle the situation, and their response was to kill seven of Saul’s male descendants. So David picked Rizpah’s two sons and five sons from one of Saul’s daughters, and they were hung (or possibly impaled), and the Gibeonites basically left their bodies hanging on display. Rizpah then went and spread out a tarp and spent the next five months protecting the bodies of her two boys and five nephews until David finally came and had the bodies buried with Saul and his son Jonathan. At that point, the famine ended.

I love this story for several reasons. It calls to God’s heart of justice and the oddness that sometimes God will call the next generation to atone for injustice—something I think we’re seeing now with racial inequality. II also think it foreshadows Christ, at least a little—seven men hanging on a tree for other peoples’ sins to satisfy the wrath of God.

It’s also a simple story of a woman’s grief. We don’t know when it took place. One of my own hypotheses is that it took place early in David’s reign, before his enemies started to rise up against him again. If so, the boys probably would have been fairly young. Rizpah’s sons might have been teenagers. The other boys, the son of a woman who was initially promised to David as his wife, may have ranged from somewhere between 20 years old to as young as 5 or 6. I could be wrong, of course, but I like the early theory because his reign was otherwise peaceful and it takes most of Saul’s other descendants out of the picture early for political intrigue. Today’s poem is out of that sort of imagining of the story.

They were boys, really—
The oldest, maybe 20,
The youngest, 5 or 6.
No firing squad, no guillotine,
No swift and merciful end
For the sons and grandsons of saul—
Just a length of rope and a tree,
A hangman’s noose in the presence of God.
An eye for an eye, a tooth for a tooth,
A lad for a lad
To repair a broken promise
And an unjust war.

How did they feel,
Lined up on that hill
Because of something a relative did?
Did the oldest weep and wail?
Did the youngest understand,
Or did he kick small stones along the path—
A childhood game—see how far
A single stone can roll
And knock the other pebbles from their place.
And did they bind his hands
With rough rope that chafed his skin?
And did they put a burlap sack
Over his head so he
Would not—could not—see
The faces of a people wronged,
Demanding bloody justice?

And Rizpah—lovely Rizpah—
So beautiful, she caught the gaze
Of Israel’s first king.
Two sons she bore him,
Such lovely boys, and not quite men.
So young—just babies, really—
When their father died.
Just little boys when she took comfort
In the arms of an army general
Only to see him die as well.

So is it any wonder, then
That she would stay at the graves
Of the last ones who could be taken from her,
And fend off the vultures and the crows
From the bodies of her sons?
Any widow would.
Any widow would want to see
The boys she tucked in—kissed scraped knees—
Would want a better fate for them
Than being food for carrion.

Photo by Abhishek Singh on Unsplash