I Don’t Recall When I Last Saw the Stars

Lisa Posted on April 5, 2020 Posted in poetry No Comments 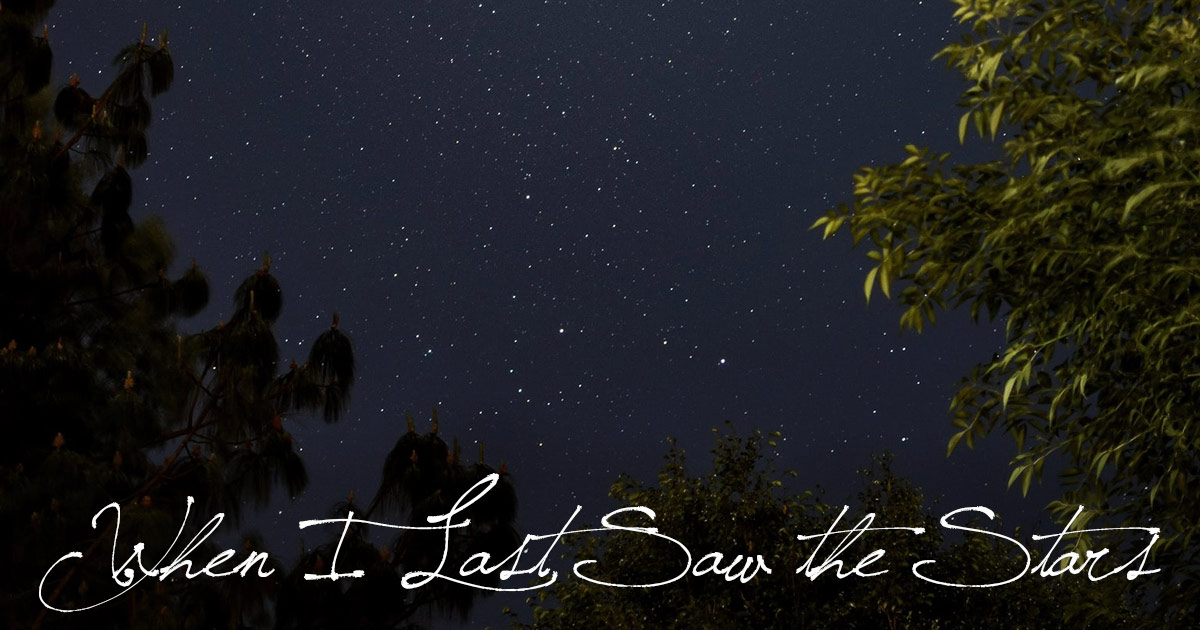 I’m doing another Poem-A-Day challenge this April, which I suspect will be one of my saving graces during these next few crazy months. I promise they won’t all be about COVID-19, or at least, even if they are, I promise not to publish them all right away. But I’m feeling this one.

I don’t normally think of myself as being impacted by the weather. I usually work in an old converted warehouse anyway; there are a few strategic skylights, but they’re not particularly close to my own office space, which I call “my dark little corner.” In fact, I love it when it rains at work; I love the sound of it drumming off the metal roof. But since we’ve been in stay-at-home mode, the weather has been impacting me more than I expected. The few fully sunny days have been instant mood-lifters. And the cloudy days just heighten the stress and worry and fear. I don’t think I have Seasonal Affective Disorder, though. I think I have “I’m living during a pandemic” disorder, like the rest of the world, and every outside factor is amplified.

Today’s sonnet isn’t really about that, per se, but it is about the fact that I haven’t had much opportunity to go outdoors. One of my favorite, if rare, pastimes has always been stargazing; even if it was simply a matter of looking up at the stars on my way to Crossfit in the morning or on the way home, I always rejoiced at seeing them. Crossfit closed three weeks ago, though, and I haven’t had a reason to go out at night, so it’s been a while since I’ve had much of a chance to even just glance up at them. Hopefully I’ll get another chance soon.

I Don’t Recall When I Last Saw the Stars

I don’t recall when I last saw the stars.
It’s been at least three weeks, and perhaps more—
Three weeks since I walked out my townhouse door
In darkness, without clouds, looking out far
To other worlds, untouched by plague or pain,
Lit bright by their own suns, with their own moons,
Controlling times and tides. Perhaps the blooms
Of unknown flowers are drinking the rain—
But as for me, clouds cover heaven’s light,
And I am stuck inside these townhouse walls,
Forbidden to respond to the sky’s calls,
Or drive around on some great starry night
And find an open field, and park, and lie
Down on the grass, and stare up at the sky.

Photo by Andrés Alagón on Unsplash