↓ Skip to Main Content
Home › poetry/">poetry › Sonnet Sunday 91: The Body is a Temple

Sonnet Sunday 91: The Body is a Temple

Lisa Posted on March 17, 2019 Posted in poetry No Comments 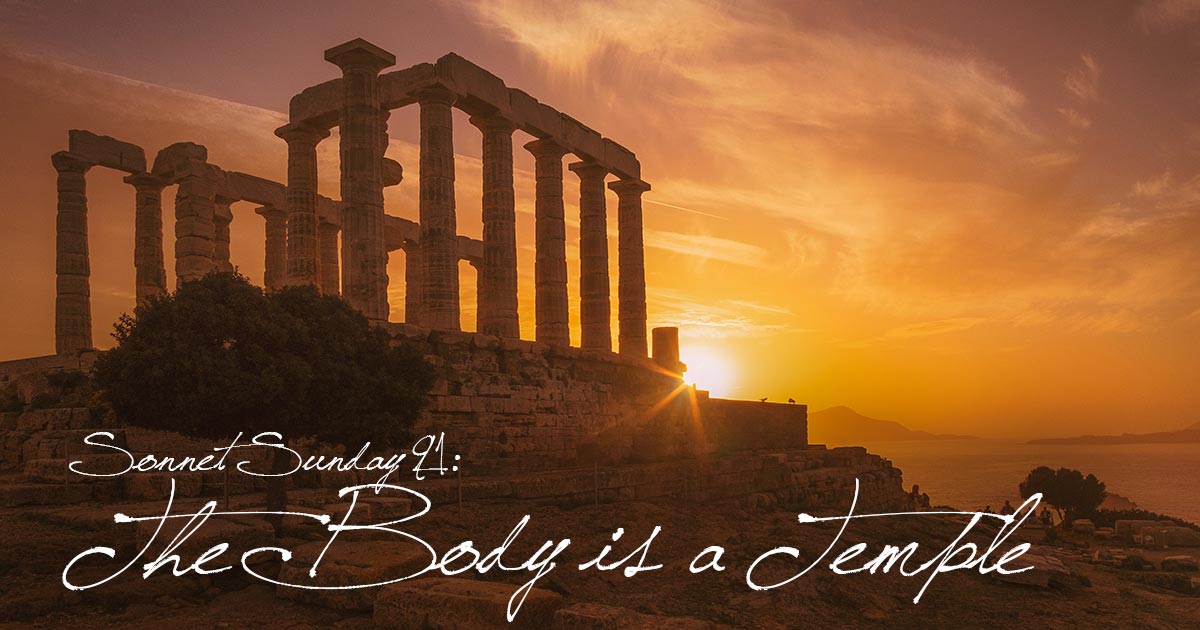 “God takes the Almighty Spirit of Christ and puts it in these broken, fragile vessels…”

This week a number of different things (Patrick’s funeral being among them) have led me to reflect on what Christ’s redemptive work means for us with mortal bodies. The theological circles I tend to watch most closely rightly point to salvation by grace through faith, not by works, but I am increasingly irritated by the downplay of human experience and work as an intentional part of God’s great plan.

Like Carol Danvers at the end of Captain Marvel, God had literally nothing to prove to Satan. He’s God! He could have just consigned Satan to Hell for all eternity from Day One (or, heck, from before Day One). And at numerous times in the Bible (Gideon being one), he could have saved his people without using people. And yet he chose to allow rebellion, and he chose to play out his grace through very flawed humans. He had no need to become fully human—to live and breathe and eat and physically touch people and get tired and cry and suffer and die—yet he chose that as the plan for our salvation. He chose to use Paul, a mortal man, to declare that our bodies are his temple—the place the ancient Israelites were to play out the drama of Christ’s sacrifice through lambs; the place where people found both spiritual and physical cleansing; the place they found fellowship with God and each other. In other words, our mortal works don’t save us, but they are intended as an entry point to God’s grace, both for ourselves and for each other.

And that is a good thing.

The Body is a Temple

The body is a temple for the Lord.
It starts a tabernacle, carried, frail,
But laws and manna in the heart still stored;
The Spirit shining in each coo and wail.

By youth, the body’s turned to permanence:
The pillared limbs, the altar of the heart.
There, SOMETHING has been placed with reverence:
It’s God, else love, authority, strength, art:

But every temple will one day be sacked
By age or by another enemy.
We’ll learn exactly how much our gods lack,
Our temples toppled, but—great mystery!

The temples to false gods will rot, decay,
But God’s will be rebuilt one glorious day.

Photo by Cristina Gottardi on Unsplash