Lisa Posted on March 3, 2019 Posted in poetry No Comments 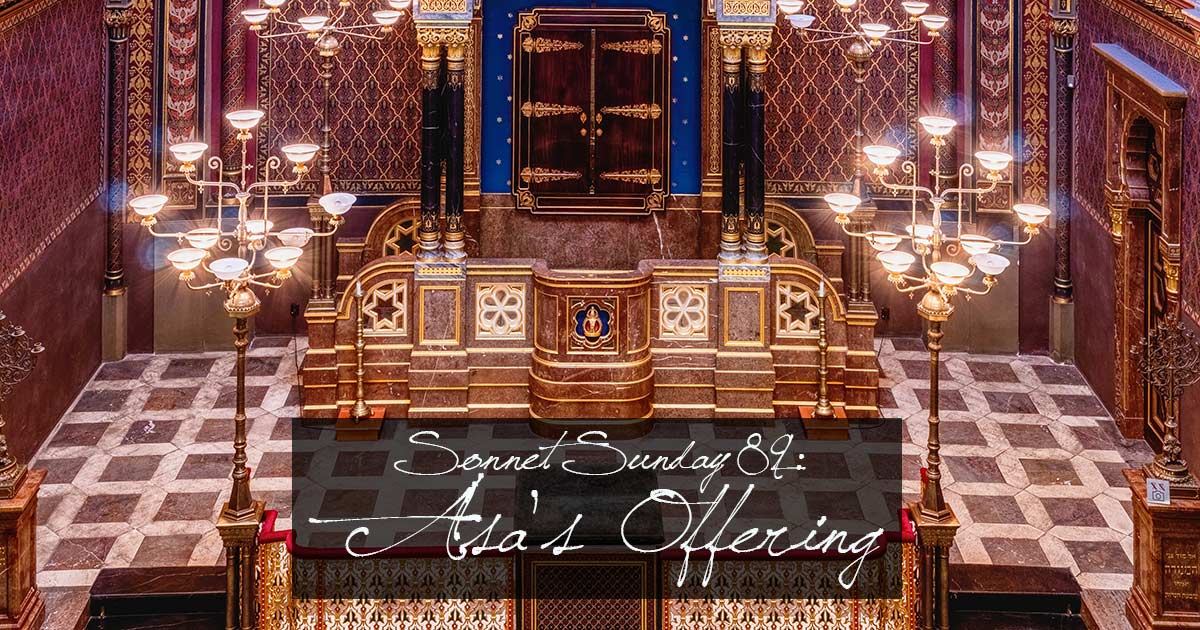 Every time I read the Old Testament I’m struck by which kings the Bible describes as good and which ones it describes as bad. The most common theme tends to be how a particular king treats idolators: the worst kings worship idols; the good kings tear them down; and the best kings tear down non-temple places of worship as well. But even the worst kings show glimmers of redemption, and even the best kings fail, especially later in life.

King Asa of the Southern Kingdom of Judah is one of the latter kings. The great-grandson of Solomon, Asa tore down the idols and added treasures as sacred gifts for the temple, so God blessed him with peace for most of his reign. But towards the end, feeling threatened by the Northern Kingdom of Israel, Asa went to the temple, grabbed the treasures he had put there, and handed them over to other neighboring kingdoms to get them on his side and get Israel to stop threatening Judah. Asa’s gambit worked: Baasha, King of Israel retreated.

But what Asa didn’t know and probably never realized in life was that God had a plan to stop Baasha for His own glory. We don’t know what would have happened if Baasha hadn’t retreated, but given that God pronounced judgment on Baasha and he was dead within a year of the incident, it seems reasonable to assume that God would have kept Judah safe.

So to remind Asa to trust him, God filled the remaining years of his rule with wars, and even gave Asa a foot disease. But Asa, still held up as a good king, never fully turned back toward God.

One of the things that finally struck me in this story is how utterly common this is. It’s so easy to wander around being a good little Christian: reading the Bible, going to church, praying. But these can be acts of complacency as much as they are acts of obedience. I’m certain Asa thought he was making a wise, and possibly even faithful, decision when he took the treasures from the temple to pay for protection. He probably thought that since he had provided the treasures, he had the right and the choice to repurpose them, as easily as we might reallocate line items from donations. But what God really wanted was his faith, not simple obedience.

All of that to say, here! Have a poem about Asa. He’s a pretty relatable guy!

King Asa offered up a sacrifice
Within the temple his great-grandpa built.
He looked around at all the treasures, gilt
And glimmering, and thought they would suffice
To offer up unto a neighbor king:
Protection money from his northern foe,
A payment to protect his land from woe.
What better use of treasure than to bring
Security back to Jerusalem?
So Asa, who tore all the idols down,
Bowed down and prayed for help from a strange crown;
Transferred his trust to foreign diadems.
He used his earthly wisdom, made the call—
And bowed down to an idol after all.

Photo by Felix Mittermeier on Unsplash