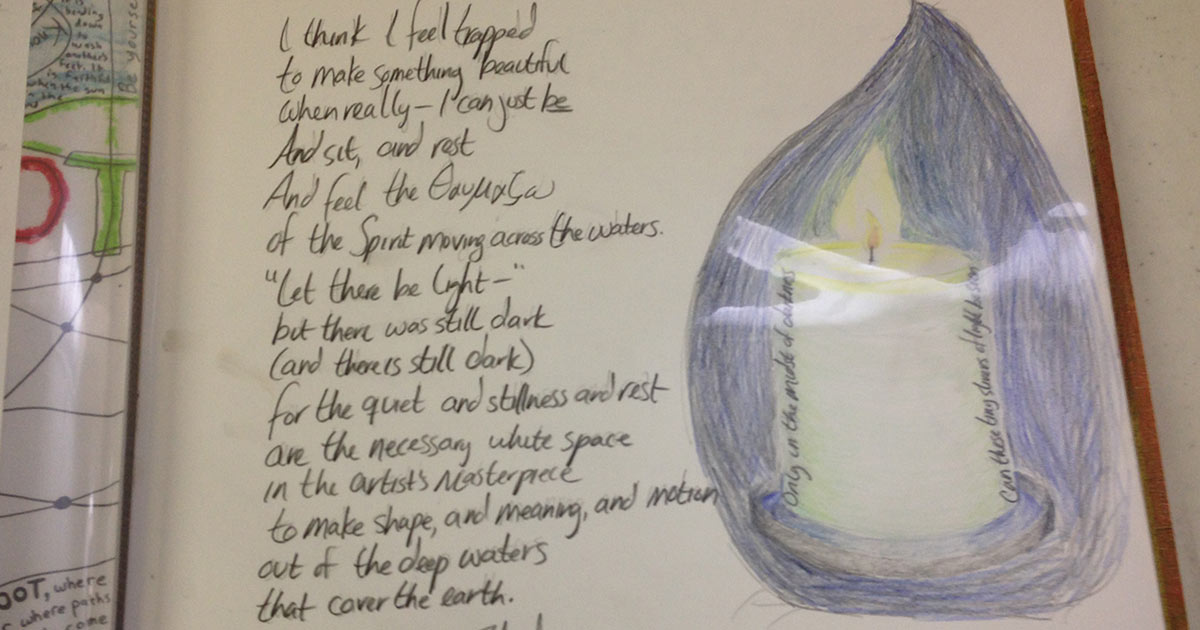 Every year participants are invited to create a page (or two, or three) for a collaborative sketchbook. Every year (so far, anyway), I write a poem about something that’s going on in my life at the time.

Today’s poem, which is not a sonnet (something I gave myself leeway to do once I hit the one-year mark), was written for my first Hutchmoot in 2014. That particular year was characterized by the quiet spaces. I made friends, but tended to bounce around a bit more than I have in later years. Maybe the better way of putting it is that I was gathering big-picture information on people rather than going in deep with a few specific friends. In my memory I’d characterize it as a very quiet, introverted year, one where I was very happy to just sit and experience.

One of the big contributing factors to that introversion was the fact that on that Friday afternoon, my boss called me to let me know that my best friend at work had been laid off. I cried, and I hid, and I think I skipped at least one session. It was a time of grief in the midst of immense light. I sat down that afternoon in the quiet comfort of the dining area at Church of the Redeemer in Nashville and created this poem and the accompanying illustration.

Three notes. First, “white space” is an artistic concept that others can no doubt explain better than I… basically, though, it indicates the areas of an illustration where nothing is happening by design so that people can pay more attention to the movement of the focus of the illustration. Second, note the use of Thaumadzo—wonder—again! I told you it’s been a recurring theme.

Finally, I know it’s hard to read the text on the illustration, but for the record, it says this:

Only in the midst of darkness
Can these tiny slivers of light be seen.

I think I feel trapped
to make something beautiful
when really—I can just be
and sit, and rest
ad feel the thaumadzo
of the Spirit moving across the waters.
“Let there be Light—”
but there was still dark
(and there is still dark)
for the quiet and stillness and rest
are the necessary white space
in the artist’s masterpiece
to make shape, and meaning, and motion
out of the dark waters
that cover the earth.