How I’d Fix the Government

Almost 15 years ago, I was in Mexico, working with a local missions group. One of them (a Mexican, to be clear) asked me where I came from.

Her face lit up. “Ah,” she said, and did a waving motion with her hand. “Very bumpy roads.”

At work we recently finished watching The Art of Critical Decision Making, a 24-part lecture series on how people make decisions, how people make the wrong decisions, how some decisions go catastrophically wrong, and what to do to minimize risk. The cliffs notes highlights are that good decisions are usually made from diverse groups who debate the facts intently, examining them from diverse perspectives and coming up with a multitude of options before picking one decision. So the Cuban Missile Crisis was resolved without triggering WWIII because Kennedy sought out multiple options, while the Challenger explosion in part resulted from NASA’s systemic refusal to listen to lower-tier opinions (plus bad data design).

Which brings me to today’s vote on Proposal 1, a sales tax increase and change to the gas tax laws, which would have been earmarked for schools, local governments, and an increase in funding to fix our badly potholed roads (to my understanding, the percentage would have increased gradually over a three year period). It also increased competition and quality oversight on the repair work done. This proposal came from bipartisan debate, with a lot of give and take on both ends, and barely met Governor Snyder’s deadline of the end of the congressional season in December.

Aggregated in a single ballot question, Proposal 1’s many moving parts seem overwhelming. But on closer examination, each appears to be the product of reasonable bipartisan compromise. And all of the components of the package are in line with the spending priorities (infrastructure, education and the reliable provision of basic municipal services) that Michigan taxpayers have consistently embraced.

Proposal 1 was finalized at the end of December (shortly before Christmas, if memory serves). Over the next four months, voters theoretically had time to get to know the proposal. One finding emerged: the more people familiarized themselves with it, the more they disliked it. It was confusing, and for being sold as the proposal about fixing our notoriously bad roads, very little of the tax increase was earmarked for the roads (especially in the first year). And of course, there’s a general high level of distrust for the government; I think WWJ cited voters’ memory of the vote to start the Michigan Lotto in the 1970s, which was supposed to increase educational funding; instead, the government decreased educational funding from other sources.

Today, Proposal 1 was shot down—78% to 22%. Which means we’re back to the drawing board. And the Lansing State Journal is already citing alternate proposals: 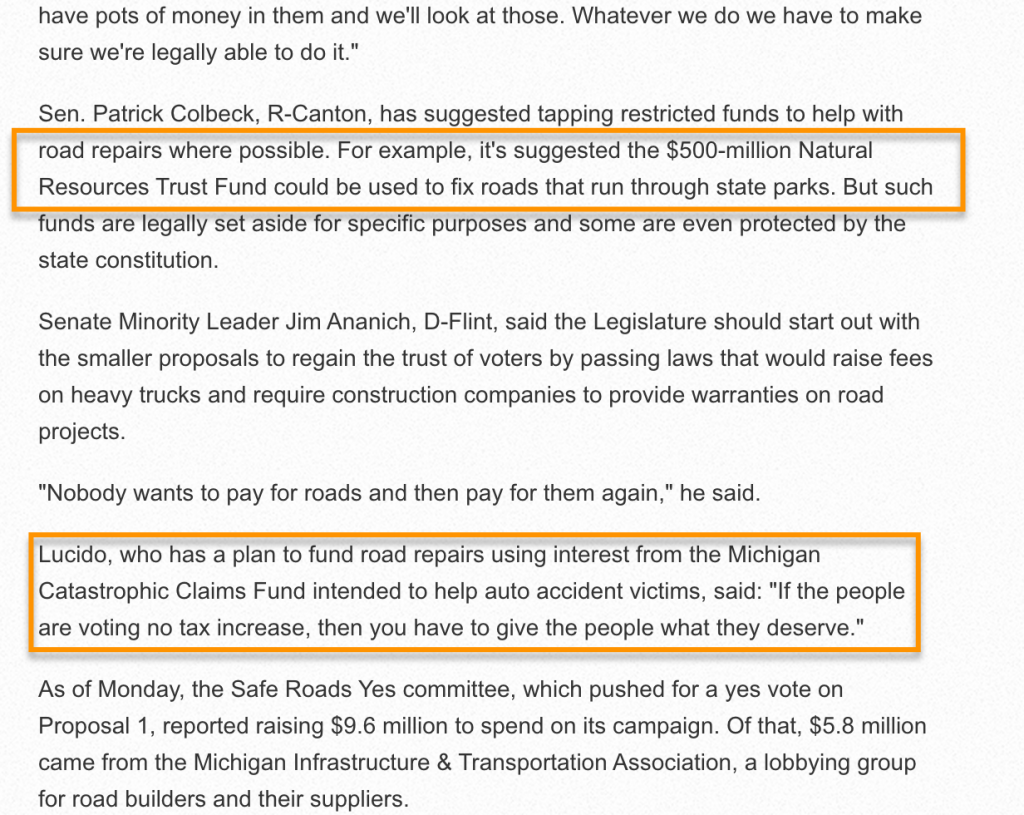 Son. Of. A. Biscuit. Especially on that first one. Yes! Absolutely! Spending Natural Resources money on roads instead of natural resources in a state where natural resources are one of our biggest draws sounds like an excellent plan. Let’s do that.

This brings me back to critical decision making. The only thing I know about how consensus was reached is from 30-60 second sound bites from WWJ in the mornings; like I said, my understanding was that Snyder gave a deadline for bipartisan agreement, and Proposal 1 was the result.

2 Comments on “How I’d Fix the Government”