Tonight, in my quest to keep myself entertained while I clean my apartment (side note: I have many things I should be doing right now instead of writing this blog post), I decided to pop in a movie. It needed to be fairly lighthearted, and preferably something I’ve seen a number of times–the sort of thing I could have as background noise, that would be good for an occasional cheap laugh.

Eventually, probably in part inspired by Gravity, I settled on While You Were Sleeping because, you know, young Sandra Bullock and Bill Pullman and I’ve seen it probably a good 20-30 times through the years and by the way did you know that the word “amuse” comes from the Greek a-museo and means, literally, “without thought.” I own this movie on VHS because wait, doesn’t everyone still own a VCR and I still use mine, it’s hooked up to my 20″ CRT TV which is my only TV, which still works for my purposes so why upgrade. 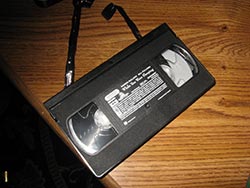 All of which to say, it was an unspeakable tragedy when my VCR decided to eat my movie, thereby wiping out access to a quarter of my movie collection (and, in that one movie, a full third of my collection of chick flicks).

If you know me at all, or have dug through my blog’s archive, you’ve probably figured out that I’m stubborn about upgrading to new technology. My cell phone dates to 2008 or so (contrary to popular belief, it supports texting; I just don’t pay for it). My TV, as mentioned, was purchased shortly before hi-def technology became affordable for the common-man. (My biggest problem with it is that video game tech only barely supports it; I could hardly read the dialog options in the Mass Effect games.) My iPod touch is only four years old, but in technology terms it’s ancient. It can’t even support iOS7.

It’s not that I’m a luddite, per se. I don’t hate technology. I’m just cheap. As evidenced by, say, my previous car, I tend to hold onto things until they break, and then I keep using them anyway.

But sometimes, as with the VCR, it’s to a purpose. I’m not talking about While You Were Sleeping; I’m pretty sure it’s on Netflix (note: I’m too cheap and watch movies or TV too rarely to use Netflix). I do, however, have some videos that can’t be replaced, such as the taped-off-TV-starring-a-preteen-Ben-Affleck Voyage of the MIMI (and the sequel!). Or the video of my missions trip to El Salvador and Honduras in 2001. You can’t even find those on YouTube, last I checked. Or there are the home videos that my parents have packed up somewhere.

That’s the problem with rapidly advancing technology. We have no idea yet what we’re losing in its wake.

Take, for example, family photographs. Digital is fine, but it makes many people lazy; they never print off the photos they love, and then lose them to a hard drive crash.

Or LiveJournal. A number of people I know were highly active on it for a number of years. For several of us (myself included) it was a blog and more a strange hybrid of journal and letter. It still exists, technically, but it’s becoming an increasingly dead zone, and it’s only a matter of time before they annihilate the histories of thousands of users.

This is nothing new, of course. On my shelf I have a book called Sappho’s Lyre, a translation of Greek poem fragments by Diane Rayor, an old prof of mine. Most of these poems are mere fragments. Some were preserved only on funeral wrappings, or quoted by other authors. Other works of antiquity were deliberately destroyed. Still others have been wrecked by more natural causes – fire or flood or mighty winds. And museum curators wage a constant battle against the damaging effects of sunlight on famous paintings.

Time, it seems, is a terrible arbiter of culture and memory.

Today, friends, it’s not about a VCR and a wrecked movie. It’s about a symbol, another nail in the coffin of a technology that revolutionized how we watched movies, that dominated and shaped industries for about 20 years, for better or for worse. It’s about mankind’s persistent inability to preserve its own history.

And it’s about the fact that sometimes it’s okay to use things even if they’re a little outdated…but nothing lasts forever, after all.

Now, if you’ll excuse me, I have to go clean up the room furnished with mismatched items from my parents and grandparents, and clean the carpet with a vacuum that’s probably older than me.

2 Comments on “A Luddite’s Lament”