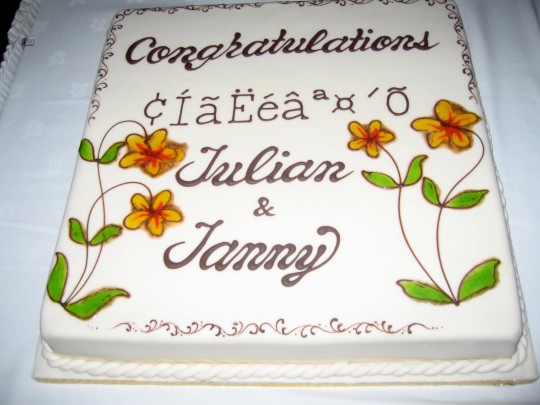 A picture is worth a thousand words. And sometimes, a picture version of words is worth a thousand words in a non-system-standard font. Read the full story about this cake over at Cake Wrecks; the short version is that the poor font on here was supposed to be Thai, but the baker’s computer didn’t have the appropriate font, and for some reason the baker didn’t know any better.

I have empathy for the guy who designed the cake. I’ve had font errors before, especially when working with free fonts. Fortunately thus far, none have gone to print (though I did send a PDF to a prof once with only half the fonts embedded; at least I caught that problem quickly).

Professional editors and designers, of course, know the solution to this (stick with standard fonts, create outlines of special fonts, package the fonts with the document when you send it to print, have a good editorial process in place to catch problems, etc.). But if you’re not a designer–if you’re not trained to think about these things–what do you do?

Simple: Don’t. Be. Lazy. Remember grade school, where they taught you to check your work? Yeah, it’s kind of like that. Had the person who ordered this cake, for example, chosen to deliver the printout in person instead of through e-mail, he would have saved himself some pain off the bat.

There’s a similar rule for the decorator, of course: If it looks like a mistake, it probably is. We’re all sound and fury here; we are quick to notice others’ mistakes, and probably quick to rip them a new one to the rest of the world, but we’re not so willing to actually call them out and ask, “Hey, was this supposed to be like this?” Maybe as an editor I’m a unique case in this, but I know that not only do I make mistakes, I’m also bad at catching my own. But I can’t improve if I’m not aware there’s a problem.

I remember sitting at the lunch table one day in middle school with my friends. One of them had a rather large booger in her nose for a good 15 minutes before she finally discovered it. And here’s the thing–all of us, and there were six or seven of us at the table–noticed it. And we said nothing. And when she finally noticed it and one of us mentioned that it had been there for a while, she got (rightly) mad at us for not pointing it out sooner. Because really, yes, it would have been embarrassing to her to have it pointed out, but I firmly believe that it was more embarrassing that it wasn’t.

In short: everything in life needs editing. The best editors in the world still need someone to edit them. So no matter who you are, if you see something that you know can be fixed, say something while it’s still fixable. You may step on a few toes, sure, but more often than not the person will be grateful for the advice.